Sometimes I feel like my co-workers are throwing ice cream, cake and candy grenades in my cube - but who's complaining? I've gotten ok at dodging them when I feel like it, but sometimes it’s really hard.

Today was extra special, though! Don't you love it when you get surprised at work with yummy + non-sugary treats? Grape leaves and chicken were on the menu today, compliments of a lovely co-worker's wife. She rocks! I never make stuff for Richard's co-workers and I went to school with most of them! If you have an SO, have you ever made stuff for their co-workers? 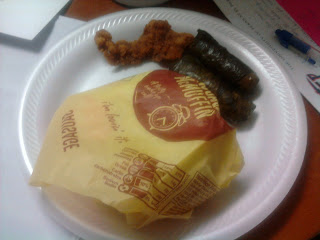 I scored the McMuffin from another worker, but am giving that one to RC for his breakfast tomorrow :)  BTW, these grape leaves were phenomenal! I tried them once in a restaurant but couldn't stomach them. I was brave today and I must say it paid off :)

They were stuffed with rice and this YUMMY creamy, red sauce and I promptly decided to invite myself over for dinner so I could score the recipe. Sadly, I was soundly rejected in front of all my co-workers :( He was kidding, but now I think he may cave in getting me the sauce recipe because he feels so bad. Fingers crossed, people – fingers crossed :)
Have you ever met anybody that doesn’t like to share their recipes?
Shout out to my SIL here cause we’ve both been trying to get the MIL’s FANTABULOUS German cheesecake recipe. Seriously, that recipe ROCKS but with 15+ combined years of trying – we haven’t made one little dent! We may have to go all stealth and commando in getting to that recipe ;)
Great, now I have cheesecake on my mind. Just great!
Off to watch Glee!
ADios :)
Posted by cynthiasolc at 11:02 AM