The Boys Are Back In Town!

We went on our regular Sunday walk with the doggies this morning, and I had a yogurt pop before we headed out.

After we came back and got ready, we headed out to the International Bakery here in town. We'd never been there before and I'm so glad we tried it! They had a great selection of pastries from all over the world. 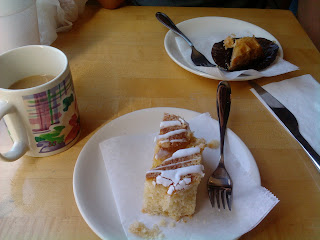 For breakfast, I went with the pineapple coffee cake with a cup of joe. Richard had a bagel and a baklava. It was a great choice. I was actually surprised I wasn't hungry an hour later because it by far was not the healthiest of breakfast choices.

After we ran some errands, we came back home and did some Sunday Funday Choppin!

My parents came over to look at the nursery and they loved it :) 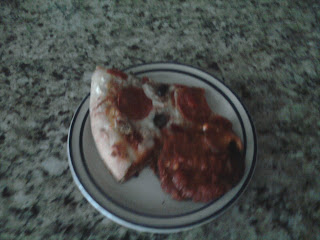 I had a slice of the leftover pizza & the eggplant instead of the Olive Garden leftovers. I guess I didn't like it that much cause I gave it away freely.

We ended up going to watch Inception and I had some popcorn sans the sugar. Yummy :)

It was a good movie. I was never a big DiCaprio fan, but I've got to say that he's turned into a great actor.

After the movie, I went to the ladies room and there was a long line. The lady in front of me actually asked if I was ok and whether I needed to go first. That was so nice of her, I had to mention it here :)

We came back home and decided to have a football style dinner in honor of the Hall of Fame game. 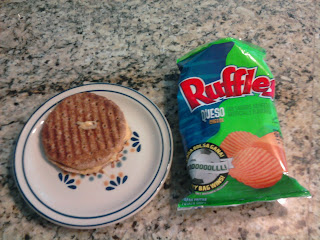 I made a grilled cheese, but only had half of it. I couldn't say no to the chips, though, these are my favorite kind. A good trick is, to buy a single serving size and you're done. I won't be snacking on them during the week, and that's a great feeling! 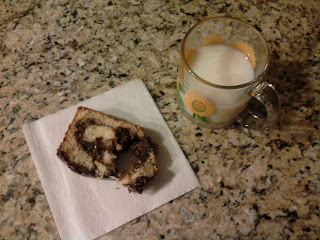 Vanilla & Chocolate Marble Cake, could I ask for anything more? Some milk maybe?

Yep, it was good.

However, I feel like I haven't been eating my best since Thursday! Today was certainly not the best.

I'm just going to have to start over tomorrow :)

And yes, I tried to read the manual to the baby car seat. "Tried" is the key word here :)