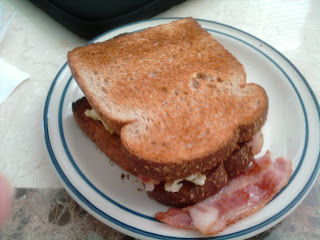 We woke up and went on our Saturday morning walk with the doggies. Abacus got a special treat and got to swim in the river, but I was bummed because I didn't get to take pictures of him.

We don't trust him, so it's hilarious to watch him swim on a leash. Specially when he swims upstream. I have to get video of that one day!

We usually go out for breakfast, but Richard was pruning our trees so I made some bacon, egg & cheese breakfast sandwiches instead. Yummy!

I had my standard iced coffee as well :)

After some cleaning up around the house, we took a nap with the doggies! It was a lazy Saturday and I love spending those with my babies :)

Richard has to study for a certification that he's taking, so we decided to go for a late lunch/early dinner. We chose to go to Italian Garden and I had their fresh salad, a breadstick and the lunch portion of the Grilled Shrimp Caprese. 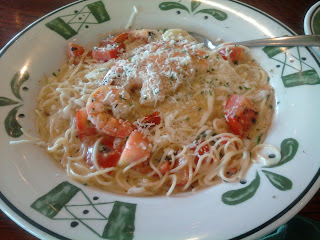 Can you believe this is the lunch portion? I only ate about a third of it and packed up the rest. That is just too much food!

Our next stop was Barnes & Noble where I had a Coconut Italian Cream soda with half the syrup and we split one of their tiramisu bowls. It was really good :) 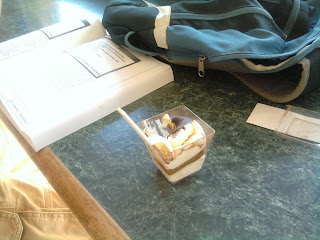 Yes, I'm almost done with the Unfortunate Traveller. Yay!!! I want to finish that soon so I can get to some fun reading.

Any recommendations???
Posted by cynthiasolc at 7:32 PM