It's less than 16 days until my official due date, and the waiting game is in full effect. Nothing to report, not even Braxton Hicks contractions. They say these contractions start to become more common, but I've honestly never experienced one.

Oh well, I just have to learn or try to be patient. Easier said than done, my friends! 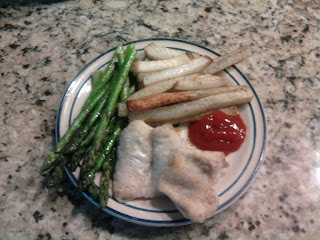 Dinner was simple today, so simple that I got to do some prep work for tomorrow!

I made baked catfish nuggets and a mixture of baked potatoes & rutabaga fries.

I'd never tried rutabaga before and I got the idea from PBFinger's blog.

I used my convection oven so I set that to 425 and baked for 35 minutes. I added the catfish nuggets 10 minutes later and my meal was done when the oven timer went off.

I also steamed some asparagus in the oven!

I have to say, prep-time was way down due to the pre-cut veggies! 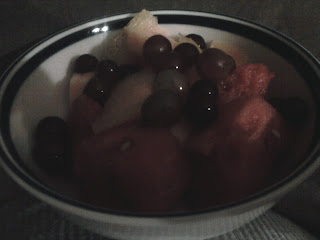 Nothing fancy by any means, just a nice sweet and refreshing fruit bowl for these muggy August nights!

Can you believe it's August now?

Not today, I need to do a software update for my phone plus try to figure out why my PC is having problems shutting down.