Not Sure What to Eat for Dinner? 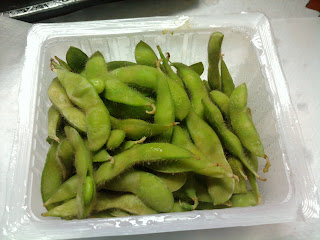 After my ice cream binge, I decided to healthy it up as much as I could and had my edamame as a snack to hold me over until dinner. 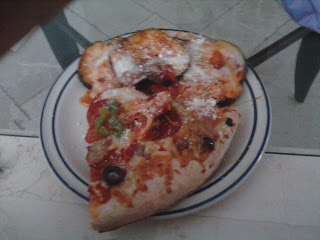 If you've ever had a mental block when it comes to what to make for dinner, check out Ideas4Recipes.com.  You just input the ingredients you have or want to use, and you get tons of ideas of how to use them!

I didn't have that problem today, though, we're enjoying our Pizza Fridays for different reasons. First, because we don't have to leave the doggies alone again after we come home from a long day. Second, we get to pair it with a healthy side. Third, a penny saved is a penny earned!

Pizza Fridays Rule! Our doggies think so too!!!

For our healthy side: baked tomato eggplant.

I placed the pre-cut eggplant in an oven-proof bowl and layered in the spaghetti sauce and cheese.  I covered it with aluminum foil and baked it alongside the pizza for 25 min at 400 F.

Something was off with my oven today, because it took longer than I thought to heat up to 400 so I'm going to have to adjust the time a bit the next time I cook this dish.  It was actually pretty good!  I love eggplant parmesan, and this is a healthy alternative to one of my favorite dishes.  I'm thinking of adding some breadcrumbs, too - that would make a nice little crust!  So many possibilities :)

For dessert, I made the banana frosty that's all the rage in the blogosphere.  I used my Bullet to blend the frozen bananas, peanut butter scoop and dash of milk.  It was really pblicious!
Posted by cynthiasolc at 9:24 PM