I thought today was going to be easy breezy, boy was I wrong.

We woke up and went on our regular doggie walk.  It was gorgeous!  I had the leftover cantaloupe-coco-yogurt smoothie.  Delish! 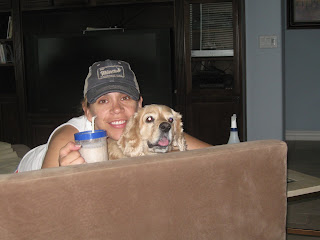 When we got home, I had no groceries to make breakfast at home but I did have enough to make a PB & banana smoothie.  Richard wanted to get a pastry at Bowie bakery, which I found hilarious because he's been known to talk trash about this landmark bakery that's been voted #1 in EP for I don't know how many years. 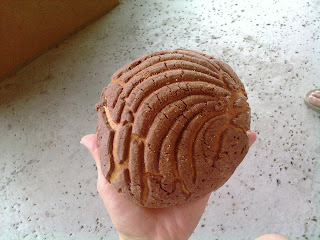 I got a concha, yummy, but I only managed to have about 2/3 of it.  I had it along with some Seattle's best coffee, which is usually too strong, but I mixed it with the decaff and it was quite good.

Afterward, we went to do our grocery shopping.  I had enough time to put everything away and get ready for church.  I was 5 minutes late, I hate being late!  Richard stayed behind to do some studying, so I decided to go get a pedicure.  At 36 weeks pregnant, I'm surprised I can still cut my own toe nails!  I found out yesterday, but I didn't want to go through the hassle of painting them.

The place I went to was great, they had these massage chairs that were AWESOME.  I had never tried them before, and it was completely worth it! 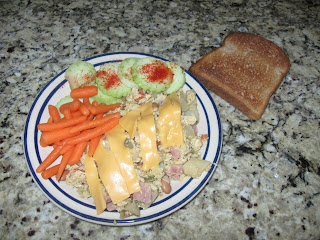 I didn't get home until 2, so I was quite hungry.  I was going to make fajitas but hadn't marinated the beef so I put that off until tomorrow and decided to make an egg & potato skillet.  We also tried the Chinese cucumber with some lemon & chili.  I had the rest of the banana water too.  The rest of the time was getting ready for the upcoming week, which you'll see in my new "Timesaver's" page.

Lets see if it works!
Posted by cynthiasolc at 7:44 PM