It's odd how things change. I remember in the 90s, Must See TV dominated the ratings and NBC had a good show practically on every night. My how the winds have changed, at least in my humble opinion.

Last fall, there wasn't one show I wanted to watch on NBC. For me, CBS, ABC & FOX have really stepped it up a notch and I was psyched to hear that CBS came out with it's fall premiere dates. Yayy!!!

Here are my CBS faves: 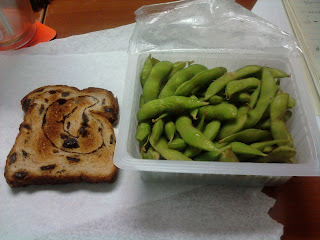 I had some more edamame for a snack, a long with the cinnamon raisin bread that didn't make it for breakfast. I don't get out until 6, so these snacks power me through the rest of the day so that I'm not famished by the time dinner comes around.
Posted by cynthiasolc at 4:40 PM

Email ThisBlogThis!Share to TwitterShare to FacebookShare to Pinterest
Labels: TV