My Tootsies (and everything else) Hurt!!!

Today was a long, but very productive day!

I actually woke up to sunlight and doggie kissies from my little babies!!! In my opinion, that's got to be the best way to wake up! 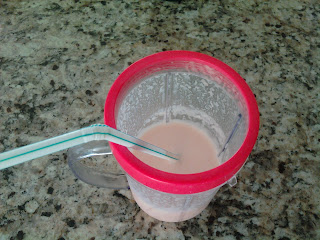 I made another cantaloupe & yogurt smoothie with coconut, but I made too much so I only had half and am saving the rest for tomorrow morning.

We went for a 45 minute walk and it was great weather, really cloudy and there was a light breeze. We decided to go to the farmer's market and had some of those awesome breakfast burritos. Apple-wood smoked bacon is the best! 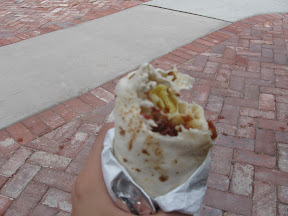 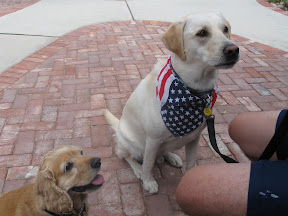 Look at my babies, too cute. Doesn't Abacus look handsome in his bandanna? He got loads of compliments.

Here's what we scored at the market: 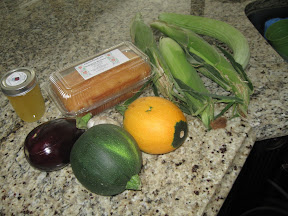 After putting everything away, I got the chance to refill my soap bottles. That's got to be one of the most boring things to do.

We then went to Lowe's and then checked out this cool antiques shop that we saw last week. They had a bunch of old signs and fuel gas pumps. Richard's looking for signs to decorate his garage, but they were a little pricey so we didn't get anything. 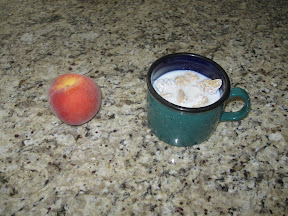 When we got home, I had frosted mini-wheats and a peach for lunch. It gave me just the right boost to tackle our next project: the nursery!!! I'll post before and after pictures tomorrow. It came out so cute and Richard helped me put the final touches together! 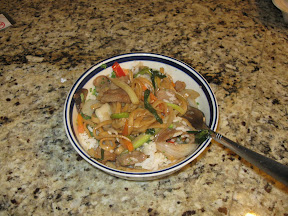 Before we knew it, it was 6:30. We were so tired we decided just to order take-out from that great Chinese place, but they were closed. They went on vacation :(

Luckily, we had a menu for another place so we just ordered from there. We both got half portions, and even then I only had half. That is just way too much pork lo mein. I also microwaved a cup of frozen veggies because the lo mein didn't have that much. It turned out really well :) 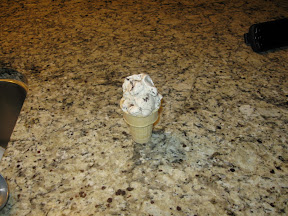 Ice cream, we all scream for ice cream! I had my yummy cone and 5 minutes later remembered that I had wanted to have some ice cream with the almond bread we had picked out earlier. Booo! I couldn't resist so I sliced a really thin piece of bread and added a scoop of ice cream. 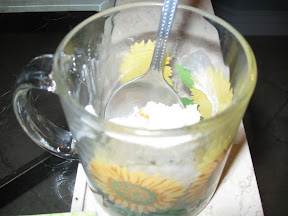 No, and I probably won't either. Richard DVR'd "The Right Stuff" and I'm not sure I'm going to get through it.

The cute little monkey just made it back from space!!!
Posted by cynthiasolc at 10:26 PM