We finally tackled the Baby Nursery this weekend, we didn't go overboard so it only took a hard day's work!

Here's what we had to work with, a guest room with pretty basic decor. I love the soft pale blue wall color and how it contrasts with white and works with gold and silver accents. We like it so much, that we decided to stick with it even though we're expecting a little baby girl! 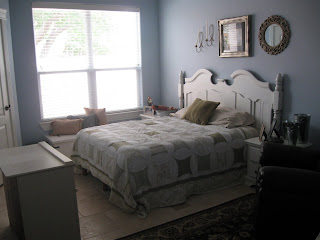 We love that this room has tons of light!

Richard got to work on setting up the crib, and I got to decorating!!!

The first thing I did was replace the old frame with a new one, that's more nursery-themed. Both Richard and I are big doggie lovers so I found the cutest print on Amazon and had it framed. Isn't the Labrador Pup just precious?

We picked the frame and matting to work with the other pieces that we already had, so I didn't even need to use a hammer for this task. I wish all projects could be this easy! 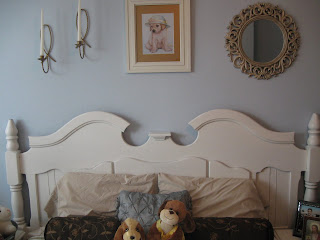 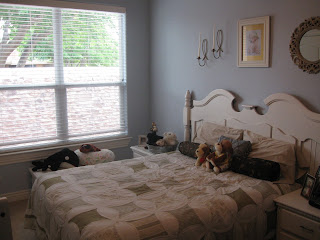 The next task did involve some self-anchoring screws. I bought this cute wall shelf that went with our white & gold theme. I also like the fact that I can replace the fabric or add personalized pictures. For now, I like the way the current fabric looks so I'm sticking with that.

I usually hate hanging items, I always feel there's so much pressure to make it straight. I should have added the hanging wire to the back, but with a shelf, I just think hanging on two screws makes it more secure. 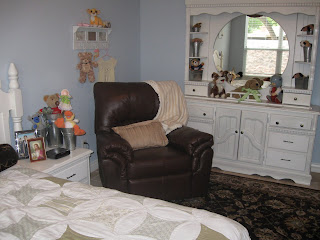 Once Richard was done with the crib, we were just breezing along that day! We got out the CoCaLo Creme Brulee bedding and set that up. I love that it works with our current quilt. I know it's not pink, but I think it's still very feminine!

Believe it or not, the next project was the toughest.
I bought these "Dandelion in Wind" Removable Vinyl Home Wall Art Sticker Decals from Amazon. They are easy to work with, but I wanted everything just right so putting these up took forever! 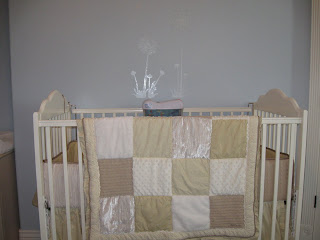 I wish there was a way to make the white pop-out a little bit more, they are definitely not as bright as the picture on Amazon would lead you to believe. The flash didn't help either! Regardless, I do like them and think they're romantic and whimsical. Plus, I didn't want to actually hang anything on the wall that might fall in the crib so these decals worked out just right. 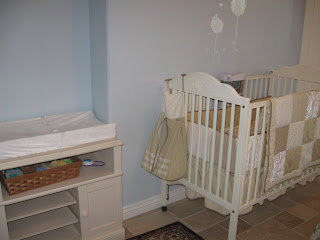 The next step was moving the old TV stand which we've converted to a diaper changing station. Go us, way to reuse! We just bought a changing pad and the cover and voila, it is now a changing station. I still need to buy some baskets to fill in the slots as I'm sure they'll come in handy in the future!

Richard helped with the final step, which was to decorate with stuffed animals.  You'll see those scattered throughout  the room.  There's doggies everywhere and Abacus & Dulci made sure to inspect each one, thoroughly!

I love the personal touches we added, like the Pound Puppies that Richard collected as a boy or the Cowboys Rowdy mascot that he's kept for all these years.  Plus, my Mom actually knit the dress that we hung on the shelf.  She is multi-talented in the arts & craft area, let me tell ya!

There's still a couple of things that I want to buy, like lamps and more throw-pillows, but I guess those can wait.

I've also been searching for a crib mobile, but haven't found anything I really like.  Then I read that high-contrast mobiles are great for babies, plus you can make them yourself.  Here's a how-to.

That'll be next week's project, so I'll let you know how that turns out!
Posted by cynthiasolc at 8:26 PM