Mr. Richard should be back tomorrow and I can’t wait! I sure do miss my Hubby when he’s away!  Specially now, I have a new found respect for single mothers and those that are married to someone in the military ‘cause it’s tough keeping everything going!

I was supposed to run today, but I chose not to. That’s right I chose not to because I don’t think I’m fully committed to loosing the weight right now. I caught an Oprah show that kinda put things in a new light. If I really want to loose the weight, then I’ll have to go through some discomfort. Whether it be laying off the second cup o’joe that I’ve been hitting up almost everyday, or making myself get up and get a workout on!

It’s my choice, in the end and I need to start making the right choices!

So on to some eats for the day. Breakfast was leftover whole-wheat blueberry pancakes that I made for my parents last night. They were so good, I didn’t even need syrup. Instead I topped it with this AWESOME sunflower seed butter. Sweet & salty doesn’t get better than this my friends! It’s even better with a banana on the side! 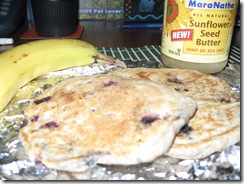 For lunch I had 1/2 torta that my Papa made for me. It’s basically a really thinly-sliced chicken fried steak on this extra-scrumptious white bread. 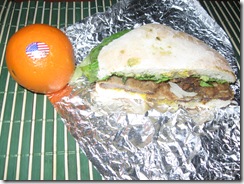 My Mama and I were on our own for dinner tonight and had no real plan for what to make. I decided to try this box of Kashmir spinach that I got on an impulse buy at SunHarvest. Plus, I had some whole-grain Naan bread that I couldn’t wait to try. 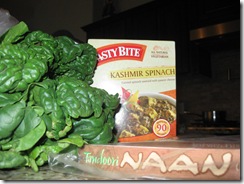 There’s my faithful companion, always by my side if there’s food involved. My parents refer to him as “Pancho, the fastest mouth in the West! He’s been known to inhale tortillas, chile rellenos and tamales! Watch out! 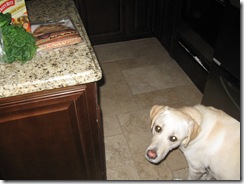 I also grilled some eggplant on the George Foreman grill and it was delicious. I could have probably eaten that entire eggplant by myself, if I really tried. I think it’s my new favorite veggie! 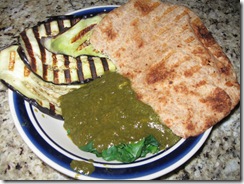 All in all, a yummy day’s eats.

The plan for tomorrow’s workout is a 20min run + a weights workout.

Email ThisBlogThis!Share to TwitterShare to FacebookShare to Pinterest
Labels: OprahKnows